The World Small Animal Veterinary Association (WSAVA) has elected Thai veterinarian Dr Siraya Chunekamrai as its new President. Dr Chunekamrai is a pioneer of veterinary practice in Thailand where she opened the country’s first equine surgery in 1996. She has a strong interest in self- and professional development and in helping WSAVA member associations in countries where companion animal practice is still emerging to raise standards of care. Dr Ellen van Nierop has been elected as Vice President. A Dutch veterinarian, she practices in Ecuador and is a former Honorary Treasurer of the association. 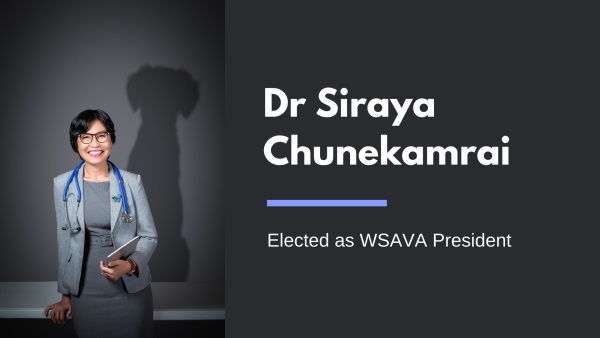 The WSAVA has also elected two new members of its Executive Board, Dr John de Jong, a past president of the American Veterinary Medical Association, who will serve as Honorary Treasurer, having held the role on an interim basis for several months, and Dr Jim Berry, formerly chair of the WSAVA’s Congress Steering Committee and a past president of the Canadian Veterinary Medical Association. All of those elected will serve a two-year term. Dr Chunekamrai graduated from Kasetsart University Veterinary School, Bangkok, and studied for her PhD at the New York State College of Veterinary Medicine, Cornell University. She first became involved with the WSAVA in 2008 as President of the Veterinary Practitioners’ Association of Thailand, joining its Executive Board as Honorary Secretary in 2012. She has been Vice President since 2018.